The use and conservation of water in Central Texas can be a complex issue. CAPCOG has compiled general information about water issues, plans and more throughout the ten-county region to help provide a better understanding of topics related to water planning. In addition, CAPCOG compiled the 2017 Water Plan data for each county in the region. The data is in Excel format, so it can be downloaded and analyzed by interested parties.

Download the 2017 State Water Plan Data for the CAPCOG region.

Every five years, the state’s Regional Water Planning Groups create plans for their regions, and each plan is incorporated into the State Water Plan. The following analysis was extracted and compiled data for the ten-county CAPCOG region from the 2021 Regional Water Plans for Regions G, K, and L. Portions of those regions resides within the CAPCOG geographic boundaries. This data focuses on decadal projections from 2020-2070 for population, water demand, water supply, water needs, and water management strategies to address needs. This data is useful in planning for economic development, transportation, land management, and many other areas. From a community perspective, this data is unique as it provides a glimpse of the future and help plan future growth and build a more resilient community in case of water shortage.

Get more info about SWIFT.

The WIFIA program accelerates investment in our nation’s water infrastructure by providing long-term, low-cost supplemental loans for regionally and nationally significant projects.
Deadlines: Letters of Interest were due by Oct. 15, 200, but the program opens annually.

Get more info about WIFIA.

The following presentations were created by CAPCOG in order to represent the 2017 State Water Plan data for the CAPCOG region.

The following Excel documents are various analyses performed by CAPCOG of the 2017 State Water Plan data.

The interactive map compiles all of the water planning regions and districts in the region. Use the layer list to turn off/on certain water districts or regions. Click on a point of interest to discover its district or region. Use the arrows at the top of the pop-up box to cycle through the point-of-interest’s layers.

Central Texas is prone to droughts just as much as it is prone to flash floods. This makes conservation topics and data valuable, so jurisdictions can better manage and protect their water supplies and usage. The Texas Water Development Board’s Water Data for Texas is updated daily to show current reservoir levels and current water wells in Texas. CAPCOG has also compiled outreach messaging on drought and conservation from state agencies and local governments.

Monitoring current water levels, surface water and groundwater, is important in understanding drought conditions. During drought times, reservoir levels may decline rapidly while many aquifers decline every year regardless of drought. Droughts cause aquifers levels to decline quickly.

Each year, the EPA’s WaterSense Partners, organizations that enhance the market for water-efficient products, practice and services, recognizes entities that go above and beyond in supporting such projects. These awards can be viewed as case studies for cities and counties nationwide. Texas cities have received this award.

Get more information about WaterSense Awards and projects.

Buda is intensifying its water conservation efforts by replacing its water meter reading system and building an aquifer storage and recovery facility. To save water today, Buda is installing an advanced water metering infrastructure that uses wireless communication technologies to read the meters remotely without accessing them in the ground. These new meters allow customers, residential and commercial, and the city to view water usage data instantly, which can quickly help identify leaks and lead to repairs before they cause excess water loss. To save water for the future, the aquifer storage and recovery facility will allow the city to store about 100 million gallons for future use. The facility will pump treated water into the Trinity Aquifer allowing it to be withdrawn for later use. Once completed, the new facility will allow Buda to diversify its water supply sources and decrease Buda’s reliance on the Edwards Aquifer. 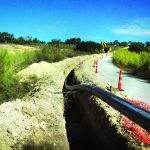 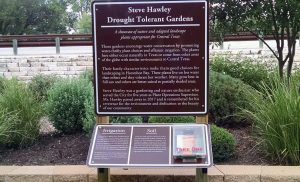 Horseshoe Bay’s Water Conservation Program focuses on reducing the use of irrigation systems. Irrigation systems, which are supposed to be efficient, consume more than half the water used by the city’s residents each year. The city finds homeowners are not knowledgeable or sufficiently engaged in operating their systems, so it encourages residents to understand their automatic controllers by checking their systems at least twice a month. The city also encourages monthly checks for broken heads and other problems, and it will audit residential systems for free. Horseshoe Bay also promotes that residents plant drought resistant gardens using native Central Texas plants. Such plants are drought tolerant, require less watering and have many other environmental benefits. 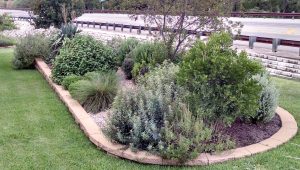 As flooding becomes more prevalent in the region, it is important to understand what actions other cities and counties are implementing. CAPCOG has compiled the CAPCOG counties’ Flood Damage Prevention Ordinances and flooding studies and reports produced by CAPCOG, and cities and counties in the ten-county region. 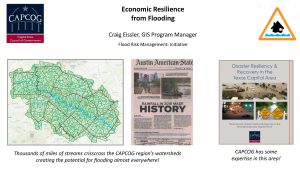 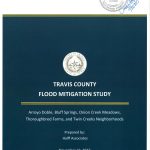 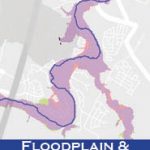 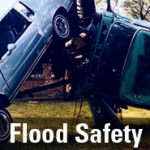 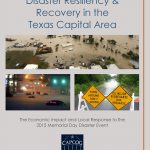 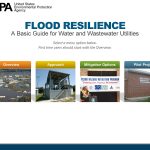 This guide is a one-stop resource to knowing flood threats and identifying practical mitigation options to protect critical assets. 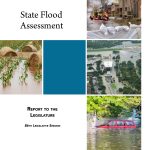 This report provides an initial assessment of Texas’ flood risks, an overview of roles and responsibilities, an estimate of flood mitigation costs, and a synopsis of stakeholder views on the future of flood planning.

The Texas Water Development Board (TWDB) developed an information clearinghouse about state and federal flood planning, mitigation, and control programs. The information may serve as a source of funding for flood projects. The site is a cooperative effort between the Texas General Land Office, the Texas Division of Emergency Management and the TWDB.

Given the deadly nature of floods and the rapid timeframe in which they can occur, it is essential to be ready for the next flood event TexasFlood.org lists critical steps to take in each stage of the flood preparedness and response process.

Learn more about responding to a flood disaster.

The Dual Disaster Handbook is a comprehensive resource to help local officials and emergency managers address the dual disaster scenario of flooding during the COVID-19 pandemic.

Travis County expanded its floodplain regulations for land development to include the Flood Insurance Rate Map’s (FIRM) 500-year floodplain instead of the 100-year floodplain after the release of the National Weather Services’ Atlas 14 historic rainfall study.

The change affects floodplain management and drainage infrastructure as new development projects will need more capacity to handle larger estimated rainfall totals and flood events. Although using the 500-year floodplain and the Atlas 14 data increases infrastructure construction costs for developers and landowners, it allows for more resilient infrastructure that can better withstand destructive weather and prevents spending on rebuilding infrastructure because of such events.

Completed in 2018, Atlas 14 provides more accurate rainfall values than estimates developed 40 to 50 years ago due to decades of additional rainfall data; an increase in the amount of available data, both in the number of stations and their recording periods; and improved methods used in the analysis. According to the study, Central Texas is likely to experience larger storms than previously expected which increases flood risks. Modeling for the 25-year, 100-year, and 500-year storms all expanded in their area and elevation because of the redefined rainfall intensities. In most cases, the new 100-year floodplain could encompass the previous 500-year floodplain.

Since it will take years for FIRMs to be updated, counties and cities have the authority to adopt higher floodplain standards to ensure new land development projects are designed and built to what will be the new 100-year floodplain once the jurisdiction’s FIRM is remapped.